Groundbreaking Research is Something to go Ape Over 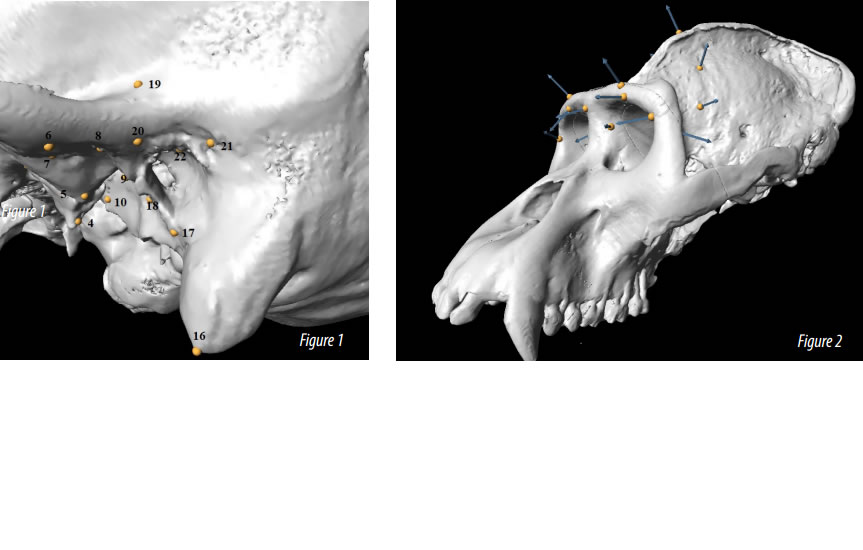 Alannah Pearson wanted to expand upon some conclusions drawn from a respected archaeological study done in 2004. Specifically, while shape of the temporal bone had long been considered of primary significance in tracing the evolutionary development and diversification of the great apes, she wanted to consider relative scale in the morphology among the great apes’ temporal bones (i.e., changes within their skulls over time). “A lot of studies have only focused on shape, but geometric sizes as they relate to shape aren’t often considered,” says Pearson, who was conducting research at The Australian National University’s School of Archaeology and Anthropology College of Arts and Social Sciences, while also working on a master’s degree in philosophy. “We wanted to look at what’s going on with the size of this bone in the great apes.”

More than a decade earlier, researchers examining the hard-tissue morphology of the great apes had made some important discoveries. Since that time, advances in analytical methods for scanning collections of anatomical specimens were made, giving Pearson hope that they “might enable me to accurately infer the relationships of hominids, including the closest extinct relatives of modern humans.” The goal for scientists was to present an evolutionary family tree, or phylogeny (i. e., the history of organismal lineages as they change through time), including images to demonstrate how and to what degree some member of a latter generation of great apes might have resembled previous ones.

Obstacles to Exploring the Tree of Life

Pearson faced some significant obstacles to conducting her ambitious research. First of all, she needed to be able to gather and examine a sufficient amount of specimen data to rigorously study the temporal bones in the great apes and persuasively make her case. Until recently, studying the collections at the few institutions which housed significant data required that researchers travel to those sites scattered worldwide.

Even though collections of scanned specimens finally began growing so that she might study them online, Pearson found that she was unable to download them. “There aren’t a lot of programs that can reliably download large files and handle precise and large numbers of 3D landmarks,” she explained, which are vital to her sampling studies of CT scans of the temporal bones for ape subspecies. “I work mostly with cranial bones, so I need to see the fine details and mesh models well and in 3D.”

Several conventional methods did exist to provide multi-plane views. The earlier study relied on a 2D structural analysis tool to look through the joint and take linear measurements. The problem was that these 2D tools were both time-consuming and not very accurate. Pearson tried using a program called Landmark and those from the Institute for Data Analysis and Visualization (IDAV). “These programs proved frustrating because they can’t handle large files; they invariably crashed whenever I tried to import big files,” she says.

An Evolution in Research Tools

Then Pearson heard about a solution from Stratovan Corporation that can handle large files and offers the imaging of fine details and modeling capabilities she sought. Stratovan’s Checkpoint™ offers integrated, state-of-the-art 3D shape analysis and visualization tools originally designed to give healthcare professionals a suite of better landmark-based tools to facilitate a deeper understanding of 3D anatomic structures. It provides 3D views of CT, MRI, PET and other 3D scans from a variety of modalities – including 3D surface scans – and enables the efficient collection of thousands of landmark points to provide precise analyses of complex 3D shapes.

“Checkpoint is easy and the programming, key strokes and configuration is pretty similar to Landmark,” says Pearson. “I could quickly use the menus and find and use files. In fact, it only took about 5-10 minutes to learn it. Once I started using Checkpoint, my research took off.”

Pearson imported PLY files (a type of 3D mesh file) into Checkpoint. “I loaded the files with full visualizations, and went through and place landmarks on the anatomical features for all 163 specimens used in the previous study,” she says. “Each landmark had to be in same configuration each time and in the exact same order, which was easy to achieve with Checkpoint.”

The study conducted by Pearson successfully replicated the results of the 2004 study, and also demonstrated that both shape and size of the temporal bone affects the phylogeny (“tree of life”) of the great apes. “In particular, we showed that hypertrophy (over development) of the temporal bones of the great apes contributed to their position in the phylogeny, whereas humans are much finer in their morphology,” says Pearson.

Pearson’s groundbreaking findings would have been far more difficult to achieve, or perhaps even impossible, without Stratovan’s Checkpoint Software. “The capabilities and graphics are far superior to anything I’ve used before,” she says. “And Checkpoint provides much better visualization for a clearer view of the vital features of collected specimens.”

Checkpoint’s comprehensive features also introduced new efficiencies, allowing Pearson to download and record data for examining the great apes’ cranial morphology in a much more precise and systematic way, and share it. “It was simple to take my landmarks in Checkpoint and export them as a dataset in Microsoft Excel for further statistical analyses by my colleague, Dr. Andrea Cardini, at the Università di Modena e Reggio Emilia,” says Pearson. “Checkpoint definitely facilitates collaboration between researchers, and helped myself and my coauthor, Professor Colin Groves, work effectively with Dr. Cardini.”

“I can easily envision surgeons and researchers in orthopedics, radiology, archaeology and other fields who need to precisely measure, compare and analyze hard and soft tissues morphology in 3D getting a lot out of Checkpoint too,” says Pearson.

In my research, it’s essential to get precise 3D measurements and the coordinates of bone structures, soft tissue and size and shape configurations. Checkpoint is the solution I recommend to researchers because it’s easy to use, reliable, doesn’t crash, can handle large files and works with lots of file formats – like Excel – that can analyze coordinate data for researchers in zoology, paleontology, healthcare and other fields.

Checkpoint
More on this product

Stratovan is a leading developer of next-generation interactive imaging software for the global medical device and diagnostic markets. The company’s solutions have broad application to disciplines beyond healthcare, such as anthropology and airport security. Stratovan launched in 2005 out of the Institute for Institute for Data Analysis and Visualization (IDAV) at the University of California, Davis.